Back to all posts

One of the most amazing aspects of music production is just how fun it is to start throwing down layer after layer, adding new instruments and melodies and samples, building up a song until it blooms into life. It's one of the reasons production is so compelling: it's entertaining like a great video game, it's engaging like television never can be, you are building real skills as you produce, and you have something to show for your work after each production session.

One of the challenges, however, is that while stacking on new instruments and sounds can be great fun, arrangement is not. If you've been producing for even a short length of time, I'm sure you've experienced the exhilaration of packing on layers closely followed by the crash, as you realize you have one giant loop of music that all sounds the same. You hit the brick wall.

But making arrangements doesn't have to be intimidating. I'm going to show you a tool you can use to remove the roadblocks of arranging and get back to the fun of producing.

What Is a MIDI Skeleton?

A MIDI skeleton is a map for the arrangement of a song. It charts out not only what the song sections are, but which instruments are in the song, and which section each instrument plays in. And where do you get all of this information? You borrow it.

Pick a song that you love and want to emulate. There are probably a lot of reasons you love this song, and I'd be willing to bet that a strong arrangement is a big contributor to its sound, whether you realize it or not. We're going to start taking notes on how the song's arrangement does what it does, so you can learn to use these methods too.

How to Build the Skeleton

This process usually takes me about a half hour if I'm being really thorough. Though I can do it in less than fifteen minutes if I'm aiming just for the broader points. 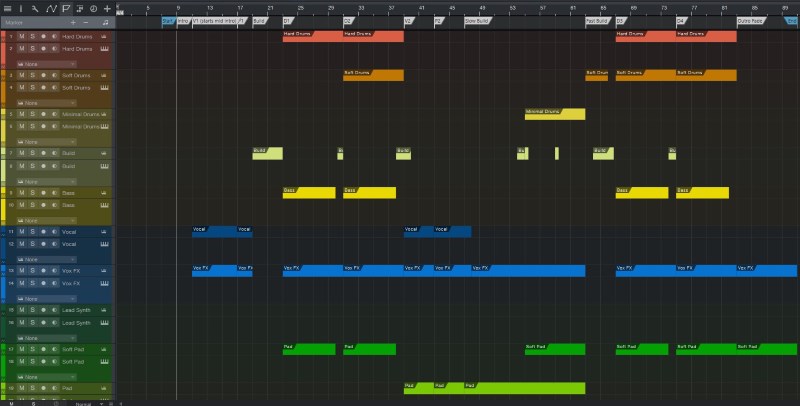 Here's one of my MIDI Skeletons. I tend to make mine thorough.

You now have a map of the song charted out in your DAW, or a "MIDI skeleton". For starters, it's a great teacher.

What can you learn? 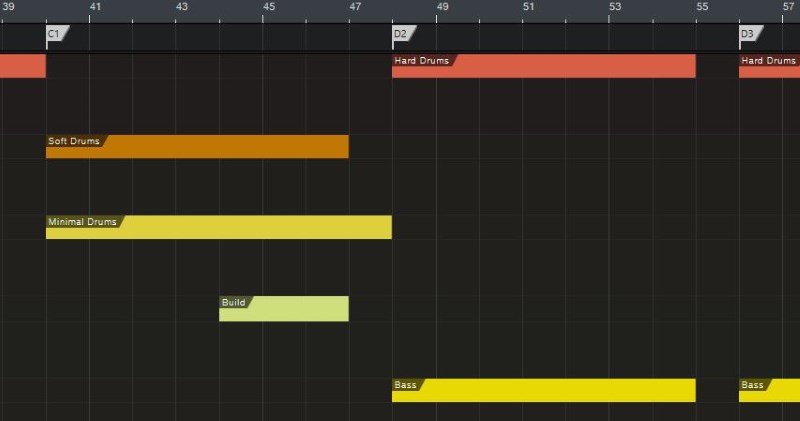 Staggering start/end timing for layers can contribute to killer transitions

A study in arranging guitar layers throughout a song

While this has been a great teacher, there's more that you can do with a MIDI skeleton than just learn from it. You can use it.

You're on the fast-track to making music similar to what you love, borrowing its strong arrangement, primary instrument selection, and transitionary tools. 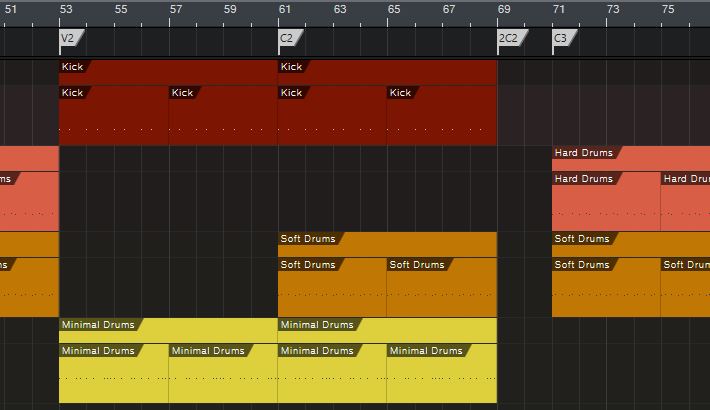 Start creating your own instrument layers according to your MIDI skeleton

But Isn't This Wrong?

If the melodies are yours and the song is your own, no one will be able to tell if you borrowed heavily from the arrangement of another song. Especially if you use a different BPM, your song is in a different key, and you use different chord progressions. After all, copyright violations stem from lyrics and melodies that are borrowed too closely. But you can't copyright an arrangement, or the tools you used to draw attention to a transition. These are just indications of craft shared by all artists.

Had Mozart directly copied melodies from Haydn, or Beethoven from Mozart, it would be plagiarism. Definitely not a line to cross. Yet all three were composers in the same Classical period of music with similar distinctions: melodies were more homophonic than polyphonic, dynamics were used liberally, and orchestras were large and included woodwind sections. All three wrote three-movement symphonies common for the time, with a fast movement, a slow movement, and another fast movement. And all three transitioned (further, for the later composers) to four-movement symphonies, often with an allegro, adagio, minuet, and another allegro. This was not plagiarism: it was just the standard format of music that composers commonly followed, in the same way that rock and pop music for decades have followed the verse>chorus>verse>chorus>bridge>chorus format.

Likewise, you could get in trouble if you aim to paint your own copy of a famous painting you really enjoy. But you're not doing anything wrong if you learn from it, taking note of how the original artist used bold or subtle colors, what type of brush strokes she employed, and perhaps stylistic details like how shadows are portrayed. Any original paintings you make with these techniques are still yours. Art is ripe for learning without doing anything leading to a copyright violation, or even wrong-doing in the inspiring artist's mind.

Changing How You Work

What you do with your MIDI skeletons and how many of them you make is up to you.

My friend has well over 100 MIDI skeletons nested in folders and subfolders arranged by genre and by aspects of the track, such as long-build and short-build songs, double-drop and single-drop songs, long-intro and short-intro songs, etc. For each new song, he picks one based on his mood and jumps in. All the hard decisions for arrangement are already made and he's free to just produce. If you produce in this style, it may be worth building a super-loop in the place of the chorus or the drop. You already know each place in the song it belongs, so copy and paste as you need to. And the MIDI skeleton template tells you to deviate from your super-loop as you build out the verses, etc. It's a great system.

Personally, I've only made about 15 MIDI skeletons, though I did make them extremely specific and detailed. Along the way, I learned a lot about how different instruments interact with each other in the same song section in addition to learning which song sections in which order speak powerfully to me, and which instruments seem to work in each song section. A couple of my songs are built on these MIDI skeletons of other songs, though I bet even the artists themselves wouldn't recognize them if they heard them.

However, I stopped making MIDI skeletons, and I've largely stopped using the small library that I created as session templates. Why? Because I no longer feel my songs suffer from poor arrangements. I spent enough time studying the big picture and the subtle techniques in making those MIDI skeletons that I already know what to do for my own songs. I don't feel stuck in super-loops for long periods of time anymore. And I like the freedom of being able to determine a song's structure on my own, based on what I feel it needs. That said, I will probably make more MIDI skeletons in the future when there's some new technique or style I want to study and emulate.

Either approach is good. Create a library of templates that foster creativity through controlled restriction, or just use this as an exercise until arrangements are no longer a problem for you.

I'd love to hear what you guys think. Have you made MIDI skeletons before? Did you find them helpful?

What arrangement tricks have you recently learned? Which transition technique do you rely on the most?